Andy Clegg has sent us an interesting biography of MUSIC for ABORIGINES, and some photos we proudly present here. For too long there has been a lack of information regarding this fantastic group, which was (like The Chameleons) totally underated by the entire world. Although too many years have passed since this group disbanded, let´s try to do some justice. Here is all the info for those who will be interested in knowing more about MUSIC for ABORIGINES: 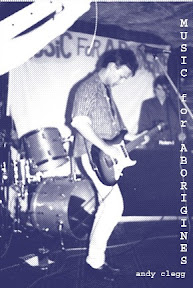 In November 1979 Andy Whitaker and Andy Clegg who were friends from school, decided to get together and record improvisations in song form with verse, chorus etc. Guitar parts vocal melodies and lyrics were all improvised and recorded live on to a tape deck with no overdubs etc. The ideas were the length a typical song and were given titles and an album title. They would treat the improvisations as a finished product and would enjoy listening to them later, as if it was a new album by a new band. Gradually other instruments would be used, drum machine, keyboards, and bass.

In 1983, Dave Booth a friend of Andy Whit would join on guitar. It was at this time that they decided to give themselves a band name. Andy W came up with the name Music for Aborigines and began to choose a selection of songs from the improvised albums to play live. 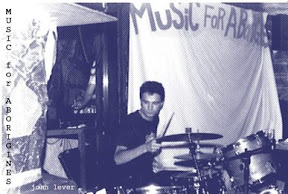 They played a few local gigs using a drum machine then decided to look for a venue in Manchester for which they could sell tickets and create a live venue for bands. They discovered The Star and Garter and the venue is still hosting live music today. Their first gig at the Star and Garter was very successful. It was at this gig that Chameleons drummer John Lever who had been friends with both Andy's, advertised the gig on a Chameleons radio interview and Mark, Reg and Dave had all agreed they would help out, by collecting the tickets on the door.

In 1986 a mutual school friend of both Andy's Col Smith joined MFA on keyboards. Their next gig would be at a local pub for charity and John Lever would join on drums. As John was officially with the Chameleons, MFA needed a permanent drummer and Mike Simms who was the drummer for Manchester band BFG (who supported New Order) became MFA drummer. After many gigs, some being supported by Eskimos and Egypt and with the Chameleons at Middleton Civic Hall the band decided to go in the studio to record some demos. "When You Were A Child" and "Ragbone Man" were the first demos to be recorded in Didsbury M/C and were used to get a record deal. 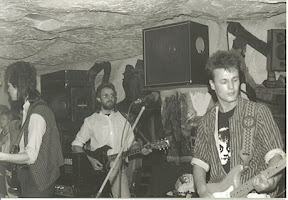 Later, Col, Dave and Mike departed from the band and John Lever introduced the 2 Andys to guitarist Aky who was a member of a local punk band The Hoax that featured Mike Joyce of The Smiths on drums. Then they decided to go in suite 16 studios owned by Peter Hook of New Order where Script of the Bridge was recorded. They chose more songs to record from the improvised albums and purposely wrote new material with the intention of releasing a 3 track 12 inch single. They asked John Lever to play drums for them. Due to Aky only just joining, he only played guitar on "Sitting on a Biscuit" and came up with the idea for "The End of Tracey Smith". The 2 Andy's played all of Col and Dave's parts, initially written for the songs. The 10 songs were recorded in 2 days and 3 of the songs were chosen for the single. The majority of the songs were taken and reworked from the improvised albums created by Andy W, Andy C, Dave Booth and Col Smith.A 12" single was released. Chris Cundy (a local artist and friend of the band) created the artwork. Chris also became the creator of the visuals the band used in their live sets.

Sadly for MFA, John rejoined the Chameleons. Later when the Chameleons eventually disbanded Mark and John approached Andy W and Andy C to form The Sun and the Moon, which Aky also would be involved with. The track "Faith" would become a regular live feature in the SATM concerts and many ideas that were created through the improvisation albums became SATM album tracks.

(Thanks a lot for this biography to Andy Clegg)