Since The Chameleons released their debut album in 1983, many artists have decided to make a tribute to this band from Middleton performing different covers; some of them have been included on their albums, some others are on compilations, and in some cases these covers are only available through their web sites. This section intends to compile all the information regarding these covers: artist or band involved, year of the release of the cover, a short description and the album where you can find the mentioned song.

Comments: Jon Auer, leader of The Posies, includes in his covers EP called 6 1/2 an electric cover of Tears, which The Chameleons recorded for Strange Times. Although it is slightly stronger, there isn´t much change on this cover from the original version.

The song is available for downloading on his official site: http://www.pattern25.com/MP3s/tears.mp3

Comments: Robert Hakalski, professional photographer who has taken some photographs to Dave Fielding (they are available on the Chameleons official site), recorded some time ago a cover of The Fan And The Bellows with David P. Wyat. This is a much more quiet, intimate and delicate version than the original, with the piano as the main instrument. The song is available through their official site Visual Machinery.

Comments: The Jealous Type has recorded a cover of Love Is, increasing its punk feeling. It has been done for a compilation project of skipping discs record company.

Comments:
Dance cover for the clubs the one this band has performed, although the guitar riff remains almost unchanged. Tech effects and femenine chorus in contrast to the low voice of the singer, very similar to Burgess´s one. This song can be found on their debut album The Rest Is Silence from 1996.

Song: Up The Down Escalator
Author: The Pernice Brothers

Comments: The Pernice Brothers dare to perform an acoustic cover of Up The Down Escalator. The rythmical section is substituted by an acoustic guitar and a keyboard. The choruses in a duet with melancholic voices give the song a special atmosphere. This song can be found on the CDSingle
7:30 belonging to the album The World Won´t End from 2001.

Song: Up The Down Escalator
Author: The Bates

Comments: The Bates on their covers´album Second Skin (in a clear reference to the Chameleons´ classic and to the fact of playing songs from other ones) perform cover which is very close to the original, without adding anything new.

Comments: Great live cover of Less Than Human,the one included on their live album For A Fistful of Deustchmarks from 1998, which is almost better than the original, with a more paused rythm and a more acoustic sound.The Melancholy and sadness rule this song. More info on their web site: http://www.theconvent.de/

The Faith And The Muse

Song: Soul In Isolation (live)
Author: The Faith And The Muse.

Comments: Live cover the one performed by this gothic band, which is included in their double album from 2001 named Vera Causa:Night And Morning. More info on their web site http://www.mercyground.com/disc/FMDisc.html

Comments: The alternative rock band Elliott includes on its single called Will You a cover of The Fan and The Bellows. The single is an introduction for the album False Cathedrals, and contains Calvary Song as the main title. More info in: http://www.revelationrecords.com/releases/88.html

Comments: The techno-electronic duet Sim Stim in their album Jack In - Log On - Nod Off, makes an instrumental cover of Swamp Thing in a very original way. Due to the electronic arrangements, the song is almost unrecognizable. More info in:http://www.egbt.com/simstim/

Song: The Fan and The Bellows
Author: Zarths

Comments: The german pop-punk group Zarths, has done a cover of The Fan and The Bellows, with many similarities to the original one. This song has been released in a compilation album called UNITED-Music for Compilations.

Comments: This german Gothik Band made a quite personal cover of Second Skin on their album from 2007, called Holy Beauty. Very Gothik-like. Not sure if the die hard Chameleons fans will like this one. Think about HIM singing Second Skin and you´ll have a close idea about what it looks like. More info about Jesus on Extasy here.

Comments: This NYC band made a cover of Swamp Thing on their EP Cover Your Bets from 2003. This band recognizes to be influenced by The Chameleons (apart from other artists like Killing Joke or even Roxy Music). James Babbo, the guitarrist, has mentioned in an interview that his favourite piece of art is the Artwork from Reg Smithies of What Does Anything Mean? Basically, and that he blew it up to poster size to have it on his wall. You can listen to some tunes of this band on their MySpace Website.

Comments: Another Gothik band performing a cover of a Chameleons song on their album One Eye Open from 1996. More info about them on their MySpace Website.

Comments: Another cover of the same song but this time performed by Misfortune500, and which is included on their album from 2007 Before This Winter Ends. The song is very similar to the original one and can be listened to on their MySpace Website.

(thanks for this one, Pedro MC) 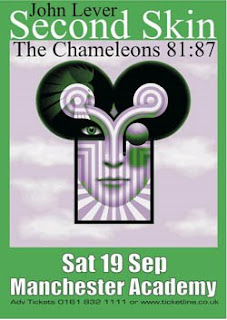 John Lever will be playing live with his band a set of Chameleons classics (songs from the period 1981 to 1987) on 19th September 2009 at the Manchester Academy. Project name: Second Skin. It won´t be like the real Chameleons, but it will surely be a fantastic experience for the artists and the audience.

More info in Second Skin Myspace Website and in the Chameleons Official Site.

On the following video, taken from Youtube, you can watch BUSHART performing a version of Soul in Isolation. The sound and video capture is from audience.

We also remember you BUSHART released last year Yesterday is History, their debut album. Yesterday is History is full of energy and tension, mainly due to the fantastic guitar work and the strength of the vocals. This is one of the best and most interesting albums of the side projects of the Chameleons members. Don´t miss it.

On the following video, which is also available on BUSHART MySpace Web Site, you can listen to Fear, one of the highlights of their debut album. Enyoy it!

Update: According to a recent post of John Lever in the Chameleons Official Site, Mark Burgess is joining the Second Skin Project for the show of Sept, the 19th at the Academy. So, this will be the only opportunity to be as closer as possible to the original Chameleons´sound. This won´t be like having the four members of The Chameleons playing together again, but still a fantastic experience. Don´t miss it! 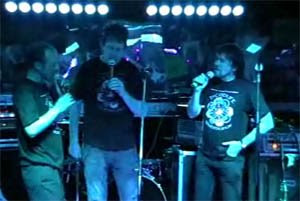 Andy Clegg, Andy Whitaker and Colin Smith (the three of them were members of Music for Aborigines in the 80´s and the two Andys also founded The Sun and The Moon with the help of Mark Burgess and John Lever) have a Comedy Show in Manchester Radio, called The Midlife Dementia Show.

Andy Whitaker has his own career as an actor (under the alias of of Andy Moore) and has appeared on some TV programmes like THE BILL, CORONATION STREET, EMMERDALE, THE ROYAL and THE ROYAL TODAY). For more details about Andy´s TV appearances, visit this link.

Colin Smith is also an actor who has appeared in over 70 plays; he has also directed some plays and he has recently written his own play called "Heaven Knows I´m Misserable Now", to be performed at The Lyceum next year.

If you want to watch/listen to any of the Midlife Dementia Show, which is aired the first Tuesday of every month from 7pm until 10pm on MANCHESTER RADIO ONLINE, please visit these links: