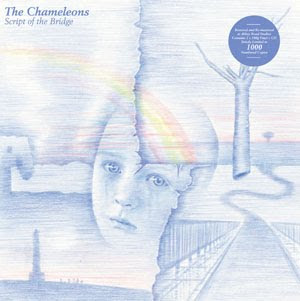 Finally, the reissue of The Chameleons´debut Album, Script of the Bridge, in double vinyl format is now available in Blue Apple Music Web Site.
The re-issue has been restricted to only 1000 copies, so you must hurry up before they disappear.

The package also contains the album in CD format with the 2012 remaster. For those only interested in the CD, you can buy it alone at a cheaper price.
This Special Edition of The Script of The Bridge has been remastered by Guy Massey, who was in charge of the remastered editions of The Beatles Discography.


As Mark Burgess explains on his ChameleonsVOX Web Site, this edition was beyond Chameleons members while preparing the 25th Anniversary edition, but now it is possible.


As all of you know, the sound recording of the original pressing of SOTB vinyl had to be compressed due to the running time (almost an hour). This new edition of SOTB, will not have such limitation as it has been released as a double vinyl, with 3 songs per side.

These are some pictures of the design of this Double Vinyl Edition, which also contains the CD: