Another Acoustic Album from THE CHAMELEONS 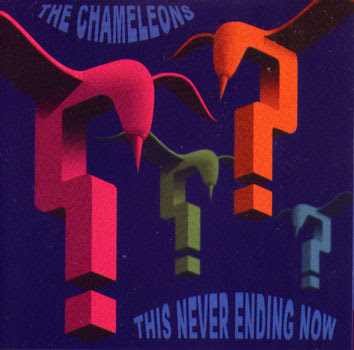 New Acoustic Album from The Chameleons revisiting their songs in unplugged mood. The album is called This Never Ending Now and it has been released through their own record label and it also contains a cover from a David Bowie´s song.

The Fan and the Bellows
Tears
Intrigue In Tangiers
Is It Any Wonder?
Seriocity
Swamp Thing
All Around
Second Skin
Home Is Where The Heart Is
Miracles And Wonders
View From A Hill
Moonage Daydream

Comments by Mark Burgess
Did you know that according to modern thinking in the field of quantum physics, everything that has ever happened, everything that is happening, and everything that will happen from this point on, is in fact happening in the same cosmic instant? No, neither did I, and it makes you think doesn't it? Or perhaps not. The thing is, It supports quite a few notions that I'd been arriving at for some time, and I'm not going to mention any of them, save one, the notion of the infinite moment. The dimension of space time, like all dimensions in the physical realm, is subject to the laws of gravity. We can see the effects of passing time obviously, one only has to observe the shifting seasons or the wrinkles under one's eyes, but the natural processes in motion here can actually be affected upon by tinkering around with physics, as anyone even vaguely familiar with Einstein will tell you.
What bearing this has on consciousness and its survival of physical death is another matter and one which I don't have time to go into right now. My tea's ready. But it struck me how music is a metaphor for capturing the infinite moment, how music seems to capture time as perfectly as any quantum event, metaphorically speaking. Of course, like when dealing with one's perception of reality in order to capture the kind of infinite moments we would wish to spend infinity in, one has to make the emotional connection. I know for a fact that a number of people have already connected with the material presented here, and that when they hear these moments expressed once more in a fresh, original way, by the very souls that created these expressions in the first place, they'll connect again. Perhaps you will too. It worked for me kiddo..

Mark Burgess Four O'clock in the afternoon. Where the heart is.