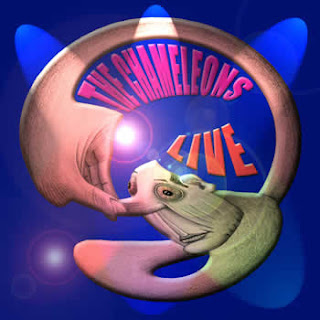 It has been confirmed by Simon Lawlor, the manager of The Chameleons, that the release date for the new album will be the 25th of March.It will be called simply The Chameleons Live and it will have more than 100 minutes of music with the following track list:
Disc One
01-A Person Isn't Safe Anywhere 02-Pleasure and Pain 03-Perfumed Garden 04-Anyone Alive? 05-Indiana 06-Caution 08-Up The Down Escalator 09-Lufthansa
Disc Two
01- Dangerous Land 02-Second Skin 03-Miracles and Wonders 04-Shades 05-Swamp Thing 06-Monkeyland 07-Splitting In Two

The first copies will have at the end of the second CD three bonus tracks recorded live in Munster:
08-Tears 09-Seriocity 10- Soul In Isolation
This work will be distributed by Universal, so it is likely it will be easily available. The catalog number is Paradiso CD002. The cover design will be made by Reg Smithies.

These are the comments from Mark Burgess included on the album:
Hello
Welcome to "The Chameleons-Live", the first definitive live album to be released since the retrospective "Live In Toronto" some years ago. The Chameleons reformation began over five nights at a small venue called The Witchwood, during the month of May 2000. At the time this was all that had been planned, but on witnessing the invasion of this small north of England town by armies of Chameleons devotees from all over the country, and indeed the world, turning our five night stand into something more remisniscent of a Chameleons festival, we quickly realised that we also owed a debt to those that hadn´t been able to take part and yet had contributed so much to keeping the spirit and the music of the band alive over the years. So we decided to go out and play a few more shows, with the ensuing momentum resulting in the band performing waht at the close of the year 2001 totalled around 67 shows: in England, Scotland, Shetland, Germany, France, Spain, Holland and the state of California in the U.S.A.
From the outset we told ourselves that a properly produced live album documenting the reformation of the band would be a worthwhile addtion to our catalogue of releases. But from the first gig until the last the group´s performances were improving and it seemed we were never quite satisfied with the results when reviewing the tapes. The Witchwood shows had been mad, frantic affairs and a period better captured on the live video "Resurrection", which we felt, coming so close on the heels of the band´s initial reformation reflects the entire spirit of the time. The audio soundtrack left something to be desired however and doesn´t really have the quality of ambience we were looking for in a live record. In addition, following the recording of "Why Call It Anything", the first Chameleons studio album in fifteen years, we eventually began adding brand new material to the sets and so we had wanted to document this too. The new songs were also evolving and improving with every performance and we felt that by attempting to capture this we would be able to offer a live album that took a step beyond the usual collection of past classics.
Recording a live album is a tricky business however especially when it´s The Chameleons because every single gig can be totally different and we weren´t able to carry a mobile recording unit with us every night. One approach was to contact Alex Staszko, Andreas Ott and others who regularly archive the band´s performances (on a none-profit making basis I should add) in the hope of compiling tracks that spanned the whole period of the reformation. Although we were very grateful for the response and the results were interesting, from a technical viewpoint the recordings were a little too disjointed and unpredictable and in the end we were forced to abandon the idea. Finally, thanks to Simon Moran of SJM Concerts we were invited to return a second time to the Manchester Academy and we were able to nail the live album to our satisfaction with the help of Alan Leach from Shed 7, who recorded and mixed the tracks alongside Ollie King at their Studio Seven in York, and John Delf our regular "Front of House" sound engineer, who alongside John Slater at "TheShed" studio in Stockport, was on hand to master the recordings. They all did a great job in presenting what I personally feel is the best live recording of the band to date and we´re very grateful.
The night wasn´t without its problems, not least when the bridge on Dave´s guitar went flying into the audience mid-way through Soul In Isolation thereby rendering the guitar totally out of tune. Sadly for this reason the song had to be omitted, but by way of recompense we´ve added a few bonus tracks at the end, which also represents an attempt to present the band in a slightly different context. As always there are some people that we feel we deserve a special mention: the band´s manager Simon Lawlor, Booma, Dougie, Will and Stan for keeping the wheels rolling, Big Tony Miller (Mr Fish) for all his running around, Shan Hira for all his help early on, Andy Moore for the lighting, and Daniela Haug, who stood in lots of drafty corridors selling merchandise on our behalf and answering a thousand and one questions from eager supporters. It is to them and to you that we wish to express our highest appreciation for making it all possible and giving us so many special nights over the last eighteen months or so.
Mark Burgess, midday, Hamburg.Germany.
P.S. Noch eine fantastische Illustrierung von Reg, oder?