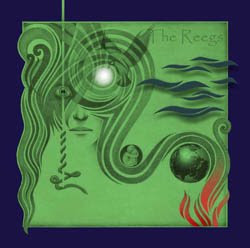 The Reegs will release this summer a definitive compilation with all their tracks from their previous albums ‘Return of the Sea Monkeys’ and ‘Rock The Magic Rock’ plus b-sides and alternative versions. Artwork by Reg Smithies.

This is a good oportunity to have all their discography if you weren´t able to buy their previous albums and singles.

The double CD contains 29 tracks and can be ordered through Blue Apple Music or Red Sun Records:

The Reegs were formed by guitarrists Dave Fielding and Reg Smithies after the first demise of The Chameleons in 1987, with the aim to explore new sounds. They recruited Gary Lavery and decided to have a drum machine instead of a real drummer. Their first release is a version of The Kinks´ See My Friends edited in a tribute compilation to this band and as a curiosity, it features Reg Smithies singing.

The band was named after an Alien race which appear in the book Now Wait for Last Year by Sci-Fi writer Philip K. Dick, the author of works like Do Androids Dream of Electric Sheep? (Blade Runner), Minority Report, Total Recall and Paycheck.

More info on The Reegs Myspace.