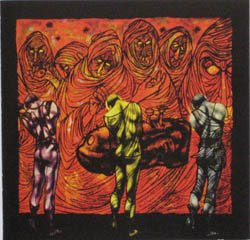 After the second demise of The Chameleons in 2003, Mark Burgess joins efforts again with his old friend Yves Altana.

Some gigs in 2005 result in the recordings of a rehearsal in October of 2005 in front of a specially invited audience. No new material is played on this gig; just a brief look at the past with live versions of tunes belongig to The Chameleons, The Sun and the Moon, MB & The Sons of God and Invincible.

This rehearsal, recorded in a 8 Track Equipment has been edited in a CD which is called Alive '05, and shows the live sound of the band as it is, without further postproductions. This is the tracklist


BIRD is formed by

On the following note, Mark hilmself tells us about the reasons to record this rehearsal, and points out that all the benefits from the sellings of this CD will we invested in the tour they want to perform in a very independent way, without the aid of tour managements:

I've been asked to write a few words regarding the latest CD 'Alive 05. Originally we did plan to record a live album at a venue in the UK as a prelude to a national tour supporting the New Model Army during October 2005. However the logistics were rather complicated due to timing and finance and so in the end I hit upon the idea of inviting a number of our regular audience to one of the band's rehearsal sessions in Manchester and recording that instead.

I thought it might be interesting for people to see and hear how a band prepares for a major tour and at the same time hear the material performed in as raw a way as possible. The event was a total success and we found ourselves rehearsing in front of around 40 or so people. What was interesting for me was that I found the live rehearsal to be a completely new and unique experience and after 25 years of performing live, new and unique experiences tend to be quite rare.

What was also interesting was the manner in which we chose to record the session, totally live to 8-track equipment, no overdubs. Recording in this manner is also very rare these days, in fact bands haven't generally made a record that way since the early sixties and the result is a tension in the recordings that one doesn't generally come across, harkening back to the early days of the John Peel Sessions at the old 8-track recording studio at Langham House, where I recorded my first BBC session with the Chameleons back in 81.

We were so impressed actually that we went back to the studio the following day to record a few additional tracks, which is why you can only hear applause on around half of the tracks presented here. One other thing I'd like to mention, by buying this CD you're not only getting something special in terms of what has been captured, but you're also helping support my work in a very vital and practical way. I'm trying to remain as independent of the mainstream music business as possible. I was about to embark on a major tour without the usual kinds of help that record labels and such like are apt to provide, such as tour support. The entire tour was personally financed and the production of Alive 05 is meant to subsidise these costs. Therefore by purchasing it you are directly aiding the artists, another rarity in this business. So for that, you have my profound thanks.

Hope to see you on the road somewhere, in the meantime, take care.”

Guaranteed not a bootleg, but a genuine, unplayed CD obtained direct from the band.