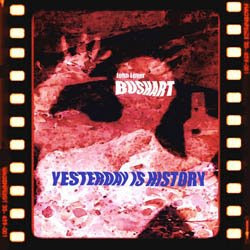 The debut album by BUSHART, the new band of John Lever, has been finally released. It´s called Yesterday is History. BUSHART will be playing live in October, the 10th at the Manchester Academy. For further details, please see the note below by John Lever himself which can be also found on the Chameleons Official Web Site.

On that note, John also mentions he is not able to join the Gig the reunited SUN & MOON is playing at The Ritz

YES ITS FINALLY HERE!
IF YOU WOULD LIKE TO ORDER A COPY OF MY NEW ALBUM
SIMPLY LOGON TO WWW.MYSPACE.COM/CLUBCHAMELEON OR WWW.MYSPACE.COM/BUSHARTMUSIC AND CLICK ON THE BUY NOW BUTTON, IT WILL TAKE YOU THROUGH THE PAYMENT PROCESS, EASY! ALSO BUSHART`S DEBUT GIG WILL BE AT MCR ACADEMY 3 (HOP & GRAPE) ON FRIDAY 10TH OF OCTOBER, TICKETS ARE GOING TO BE £5 FROM PICCADILLY BOX OFFICE AND MCR ACADEMY, ALSO YOU WILL BE ABLE TO BUY TICKETS VIA THE MYSPACE SITES FROM THIS WEEK, THE TICKETS WILL BE £5 +£1.50 P+P!!

ALSO ON A MORE SERIOUS NOTE, AS SOME OF YOU MAY KNOW I WAS ASKED TO DO THE MCR V CANCER GIG AT THE RITZ WITH THE SUN AND THE MOON, BUT I HAVE TO DECLINE THE OFFER, DOWN TO BAND POLITICS I SUPPOSE, BUT AS A RESULT CAN`T DO THE GIG, MANY APOLOGIES TO THE PEOPLE WHO WERE LOOKING FORWARD TO THIS, BUT IT REALLY IS A NO GO, APOLOGIES ONCE AGAIN!
JOHN.X

To listen to some songs of the debut album by BUSHART, please visit the BUSHART MySpace Site