THE SUN & THE MOON Reunion 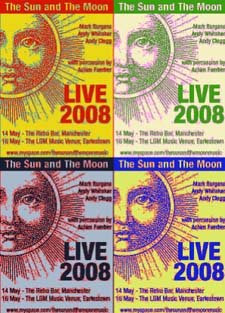 Fantastic news for all the SUN & MOON fans. April 2008 sees the reunion of three of the four original members for a set of acoustic gigs. Mark Burgess, Andy Clegg & Andy Whitaker join hands again and the magic will surely flow...


-14 May at the Retro Bar in Manchester


-16 The LGM Music Venue, Earlestown (between Manchester and Liverpool)

(1)For a couple of videos (Picture of England and Arabs&Americans) of S&M playing Live at LMB, please visit the The Legendary Manchester Busker Web Site.

Unluckily John Lever will not be able to join them so Achim Faerber will be playing drums. Is it possible the future will bring new compositions by these great artist working together again? Who knows...

Stefan, a fan from The Chameleons UK and related projects informed us that on the following link there are available in mp3 format the Manchester Radio Online Sessions of The Sun and The Moon.